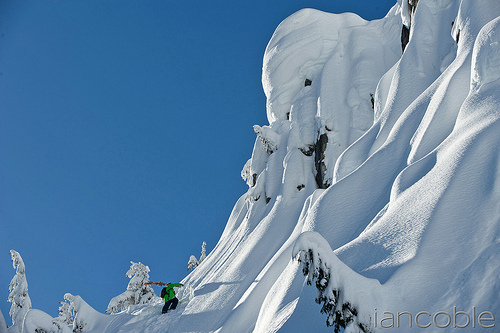 February 23, 2011 In Uncategorized By ian@iancoble.com

Last Week in the Pacific Northwest It’s been a little while since I spent some time posting to the blog. So, as I spend a much needed day in the office catching up on emails and editing, and icing a sore back, I thought I’d make a post about what new shoots have been happening.
After what was a very lack-luster January in the Pacific Northwest, February has been a much needed refresher. With numerous storms stacked off the coast, the Cascades have been getting pummeled with snow. And to make matters even better, we’ve even been getting a couple of bluebird days in between… something that is typically a rarity around here. To make this series of storms even sweeter, I was finally able to get into a new zone in the Cascades I’ve been scouting for years. Due to it’s location and terrain, it’s not a zone that you can access very often. The snow has to perfect (stable, deep and consistent), the winds have to be calm and the skies have to be blue. Last week, after over a year of scouting, I was finally able to get out and shoot this area. Incredibly happy with finally realizing that dream. Unfortunately for now, I won’t be sharing the shots from that zone… not yet. Right now the images are on hold and I can’t share them. But once they get released, I’ll make sure to post them along with some more details of that days shoot.