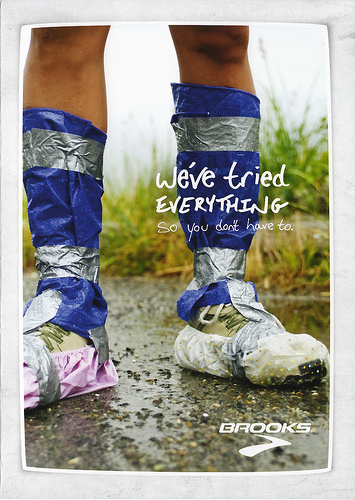 September 26, 2011 In Uncategorized By ian@iancoble.com

Last month I got a phone call from the people at Brooks Running asking me to shoot a new ad campaign for their new Gore-Tex shoes, the Ghost and Adrenaline. While I was stoked at the prospect of shooting for Brooks, I was a bit nervous. Not nervous about shooting for Brooks, but because we were going to be shooting a waterproof shoe campaign and here it was late July… not the best time of year for crummy weather in Seattle. So, as the shoot came together, we had all the contingency plans available and ready to put into action (buckets of water, garden sprayers, hoses, water truck… you name it). However, as the morning of the shoot arrived, we couldn’t have been more blessed as a huge thunderstorm descended on Seattle. It poured rain (with thunder and lightening) all morning long, providing us with great cloudy backgrounds, huge natural puddles and an all around wet look to the shoot.
The only bummer about the days shoot was that the torrential rain destroyed one of my Nikon D3 bodies. After hours out in the rain, the poor thing just couldn’t hang any longer. Fortunately, it’s occasions like this that have led me to always carry back up bodies on a shoot. After swapping the old with the new, we were able to continue shooting without missing a beat.
Print Ad for Magazine I’m really happy with how the campaign turned out. Something a little different than your typical running shoot, with a little bit of humor interjected.
Outtake from the day’s shoot We also shot a short video for this campaign and we’ll be posting that on the blog shortly.
A huge thanks to Brooks for choosing me to shoot this campaign for them.